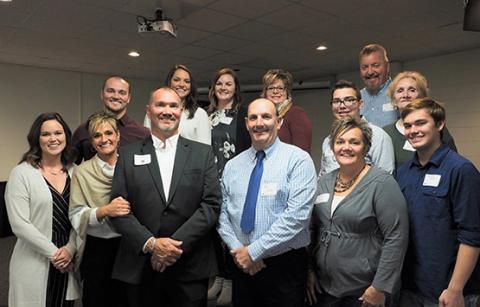 The North Dakota State College of Science Athletic Department is inducting five individuals and two teams into the Letterwinners Hall of Fame. Inductees will be honored on Saturday, September 29, 2018 during the Hall of Fame Banquet at 7:00 p.m. in The Alley at the Hektner Student Center on the NDSCS campus in Wahpeton. Information and registration for the event, along with additional information about the inductees, can be found online at ndscsalumni.com/homecoming.

This year’s honorees are:

Bradley Zurn graduated from the NDSCS Plumbing program in 1991. He was a defensive tackle/end for the 1989 and 1990 Wildcat football teams. Zurn was honored as Outstanding Lineman in 1989 and 1990, and was named to the All-Conference First Team in 1990. He was also a member of the 1990 Wildcat track team and threw shot put.

James Carey is a 1968 Industrial Maintenance graduate of NDSCS and was a dual sport athlete from 1966-1968. He was a halfback, defensive back and kickoff return specialist on the Wildcat football team. On the field, he had one of the longest kickoff returns of 98 yards. Carey also wrestled for the Wildcats in the 160-pound weight class. He took second place at nationals, which qualified him as an All-American and provided the opportunity to try out for the Olympics.

Anne Graner is a 2005 NDSCS Liberal Arts honors graduate. She played guard for the Lady Wildcat basketball team. Graner was named a third-team NJCAA All-American in the 2003-04 season, and was awarded NJCAA Honorable Mention All-American in the 2004-05 season. She was selected as All Conference and team Most Valuable Player both seasons. Graner earned many other team and conference awards, which included NJCAA Academic All-American both seasons. She transferred to the University of Portland, where she played guard and achieved NCAA academic recognition. Graner continued on as an assistant coach for the University of Portland’s women’s basketball program.

Wayne Jacobs is a 1992 NDSCS Diesel Technology graduate and played center for the Wildcat men’s basketball team in the 1980-81 and 1981-82 seasons. He went on to play for the University of Mary Mauraders from 1982-84.

The 1977 and 1978 Wrestling Teams were impressive on the mats and in the classroom. Together, the teams were 26-0 in duals, which included challenges in the NDCAC and across the nation. The Wildcats beat all the four-year schools in the conference and defeated top-ranked Willmar Junior College. The 1977 team topped out with a #4 ranking in the NJCAA polls, and the 1978 team was ranked #2 at the end of the year. Both teams finished with Conference and Region 13 championships. Both teams qualified six athletes for the NJCAA championships. The 1977 All-Americans included Jim LeDoux at 150 pounds and Pat Copenhaver at Heavyweight, who both placed fifth. The 1978 team had Jim LeDoux again at 150 pounds placing fourth, Darrell La Fontaine at 158 pounds placing sixth and Nick Moenkedick at 177 pounds placing fourth. The 1977 team was second in the nation with team grade point average. The 1978 team was #1 academically in the NJCAA with 12 Academic All-Americans with a grade point average over 3.0. Larry McDaniel was named Region 13 Coach of the Year for four consecutive years.

Shelley Blome, NDSCS Director of Financial Aid, will be recognized as a 2018 Letterwinner’s Hall of Fame Honorary Inductee. She has spent more than 38 years on the campus of NDSCS and has been the Director of Financial Aid since 2014. Blome has always had a passion for students and believes that everyone who works on campus must put students first. She not only takes care of students while they are on campus, but has built relationships and stays in contact even after they leave NDSCS. During last year’s Hall of Fame Banquet, this was evident as she was specifically thanked for her service by many of the inductees. At that event, it was suggested that she be inducted into the Hall of Fame and that request was met with a standing ovation. Many student athletes have Blome to thank for helping them progress toward a degree and a promising future.