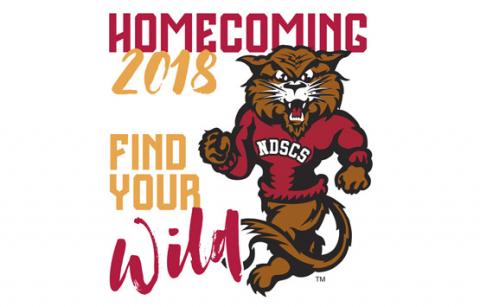 The community is invited to join North Dakota State College of Science as the College celebrates Homecoming during the week of September 24-29, 2018 in Wahpeton, N.D. The public can show their Wildcat spirit and enjoy a full line-up of events for alumni and community members. The full schedule of events can be found online at ndscsalumni.com/homecoming.

Homecoming coronation will take place on Wednesday, September 26 at 8:00 p.m. in the Bremer Bank Theatre in the Harry Stern and Ella Stern Cultural Center.

A bonfire for NDSCS students will be held on Thursday, September 27 from 9:00-11:00 p.m. in the Earl “Skip” Bute Alumni Stadium parking lot. This event will include outdoor music played by a disc jockey.

A variety of events will take place on Friday, September 28, including the Catbacker Luncheon at 11:00 a.m., followed by the Homecoming Pep Rally from 12:00-1:00 p.m., Culinary Arts food shows and campus tours. The NDSCS Electrical Technology department will also celebrate its 95th anniversary with an open house from 3:00-5:00 p.m. in Barnard Hall.

Distinguished alumni and friends will be recognized as Homecoming Honorees during the Alumni and Friends Awards Recognition on Friday, September 28 at 7:00 p.m. at the Hektner Student Center. A social will precede the awards ceremony, beginning at 5:30 p.m. Reservations are available online at ndscsalumni.com. This year’s honorees are: Roger Worner, Alumnus of the Year; the Delano and Myrna Lotzer Family, Family Tradition Award; Dean Twidwell, Wildcat of the Year; Minn-Dak Farmers Cooperative, Friend of the College Distinguished Award; Barbara Bang, Parade Grand Marshal; and Kerri Kava, Commitment to Excellence Award.

Athletic events during Homecoming include Wildcat volleyball at home against Mayville State University JV at 6:00 p.m. on September 26. The Wildcat football team will face the M-State Fergus Falls Spartans at 1:30 p.m. on Saturday, September 29 at the Earl “Skip” Bute Alumni Stadium.

Five individuals and two teams will be inducted into the Letterwinners Hall of Fame on Saturday, September 29 in The Alley in the Hektner Student Center. A social will begin at 6:00 p.m. with the recognition banquet to follow at 7:00 p.m. Reservations are available online at ndscsalumni.com. This year’s inductees are: Bradley Zurn, James Carey, Anne Graner, Wayne Jacobs, Shelley Blome, and the 1977 and 1978 Wrestling Teams.