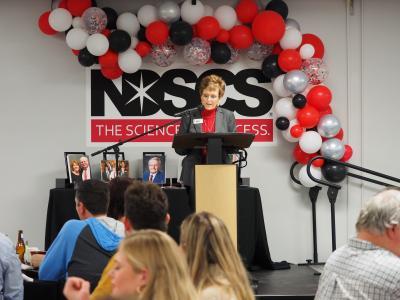 Homecoming festivities were held September 30 and October 1, where both the Foundation and NDSCS Athletics honored several award winners. Friday began with a Catbacker Luncheon, pep rally, and Alumni & Friends banquet. About 150 were in attendance Friday evening. The honorees were: Roger Hentges, Alumnus of the Year, C & S Farms, Friend of the College, Vivian Bernotas, Parade Grand Marshal, Barney Hilgers Family, Family Tradition, and Curt Gollnick, Wildcat of the Year. Kim Nelson, Executive Director, led the program while each honoree spoke. President Flanigan addressed the audience, sharing his newfound "Wildcat Pride" and is excited to be among those that truly cherish the College.

Fortunately, the weather held off for Saturday's parade. Vivian Bernotas led the Alumni and Athletic Honoree vehicles. Following the parade, a tailgate celebration sponsored by the Culinary Arts students consisted of a whole hog roast, beans, and coleslaw. The Wildcats took on Central Lakes Community College, defeating them 52-14. The evening concluded with the Hall of Fame Banquet honoring David "AJ" Jackson, Scott Morrison, Gordy Morrison, and the 1999 Football Team.

Each year, the Alumni Foundation looks forward to this special weekend of recognition and time with many alumni and friends while we celebrate NDSCS. We thank those that came 'home' and hope to see you next fall!

To view photos from the weekend visit: Homecoming 2022 Album