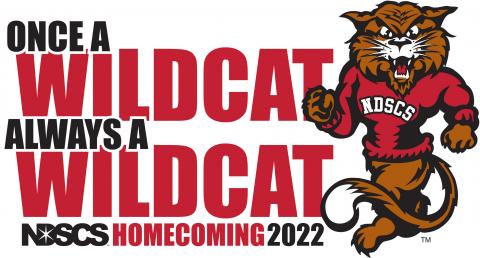 The community is invited to join the North Dakota State College of Science (NDSCS) as the College celebrates Homecoming during the week of September 26-October 1 in Wahpeton, N.D. The public can show their Wildcat spirit and enjoy a full line-up of events for alumni and community members. The full schedule of events can be found online at NDSCSalumni.com/Homecoming.

A variety of community-wide events will take place on Friday, September 30, including the Catbacker Luncheon at 11 a.m., followed by the Homecoming Pep Rally from 12-1 p.m., and campus tours for alumni and friends from 1- 4 p.m. The Academic Services Center (formerly the Learning Skills Center) is hosting an open house celebrating its 50th Anniversary from 2-5 p.m. Past and present faculty, staff, volunteers, and students are welcome to stop by Old Main.

Distinguished alumni and friends will be recognized during the Alumni and Friends Awards Ceremony on Friday, September 30 at 7 p.m. at the Hektner Student Center. A social will precede the awards ceremony, beginning at 5:30 p.m. Reservations are available online at NDSCSalumni.com. This year’s honorees are: Roger Hentges, Alumnus of the Year; the Hilgers Family, Family Tradition Award; Curt Gollnick, Wildcat of the Year; C&S Farms, Friend of the College; Vivian Bernotas, Parade Grand Marshal.

On Saturday, October 1, the Homecoming Parade will begin at 10 a.m. Parade attendees should plan to view the parade anywhere along Minnesota Avenue/Dakota Avenue between 7th Street North in Breckenridge and 9th Street North in Wahpeton. Following the parade, join us for a Tailgate Celebration starting at 11:30 a.m. at Frank Vertin Field. New this year, our Culinary Arts students will be roasting a whole hog and serving it with coleslaw, potato chips, beans, and a dessert. The meal will be offered for $5 per plate until gone. Money raised will go to our Culinary Chef’s Club learning trip. Sponsors of the event include N.D. Pork Council and Northarvest Bean Growers Association.

Three individuals and one team will be inducted into the Letterwinners Hall of Fame on Saturday, October 1 in the Hektner Student Center. A social will begin at 6 p.m. with the recognition banquet to follow at 7 p.m. Reservations are available online at NDSCSalumni.com. This year’s inductees are: David (A.J.) Jackson, Scott Morrison, Gordy Morrison, and the 1999 Football Team.

Various events are planned for NDSCS students throughout the week including a hypnotist, a caricature artist, and bowling. Outdoor events include a drive-in movie on Tuesday, September 27 beginning at 9 p.m., an outdoor dance Wednesday, September 28 from 9 p.m.-Midnight, and a bonfire on Thursday, September 29 from 9-11 p.m. These outdoor events will all be held in the Oval (Wednesday) and the Earl “Skip” Bute Alumni Stadium parking lot (Tuesday and Thursday) and will include amplified sound or music.