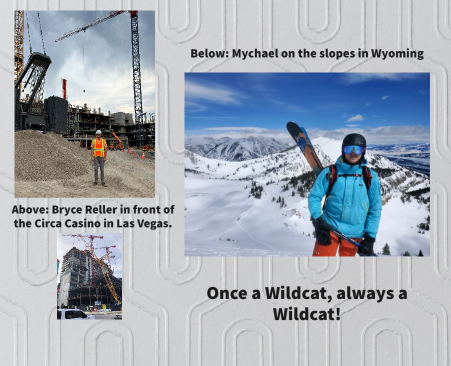 Hailing from Grand Forks with a four-year university in their back yard, Bryce and Mychael Reller, twin brothers, took a different path than many of their college-bound classmates. Bryce shared his decision was more financial based and wanted to finish his education in two years. Mychael also agreed the two-year option was more appealing both timewise and financially.

Bryce started out as a Land Surveying major but realized quickly that Construction Management was a better fit. He made the change at semester break of his first year. He joined Mychael and the two graduated in 2019. They joined DECA their second year earning trips to New York and Florida. Mychael stated that they are competitive which was a great asset to the team. They loved their experiences at NDSCS together. Some might have assumed they’d land in the same city or area following college, but they would each go off on their own career adventures.

Bryce was recruited by the Raymond Group of Las Vegas at the spring NDSCS job fair. He took the chance to move to the “City of lights” and hasn’t looked back. He helped manage the building of the Circa Casino on popular Fremont Street, boasting the world’s largest sportsbook and roof-level pool deck. After 2 ½ years, Bryce took a job with a company in Nashville for 8 months before returning to Las Vegas. He is currently Project Manager for Spectrum Construction, LLC, which specializes in division 9 scope, building mostly resort-style apartments. He lives in Henderson, just south of Las Vegas with his girlfriend Sammi.

Mychael’s career began locally as a Project Coordinator at Strata Corporation where they make a variety of aggregate products. He was later approached by Standard Drywall, Inc. and like his brother, was not afraid of moving or a new challenge. Mychael relocated to Jackson, WY where he resides with Eva. As a Project Engineer, he provides cost estimates for a variety of jobs. Projects range from residential to commercial, anywhere between 10K-120M. They do custom residential and commercial jobs including metal stud, framing, drywall, lath, and plaster.  With several offices in the west and southwest regions of the US, Mychael has the flexibility to transfer or to work remote.

Both Bryce and Mychael have proven that success comes with hard work, taking chances, and not selling yourself short. They credit their NDSCS education for laying the groundwork that has led them to their respective careers. They admitted that they were rare among classmates as most were looking to stay in North Dakota. While they enjoy coming back to visit, they have settled nicely in their new homes away from home. Both are appreciating the opportunities to expand their knowledge, skills, and experience. The change of climate isn’t bad either.

The twins aren’t the only ones in their family to attend NDSCS. Elmer Streifel, their grandfather, was a 1962 NDSCS Electrical graduate and went on to be a master electrician and owner of Jamestown Electric.

We are excited to follow Bryce and Mychael to see where else life and their careers take them.