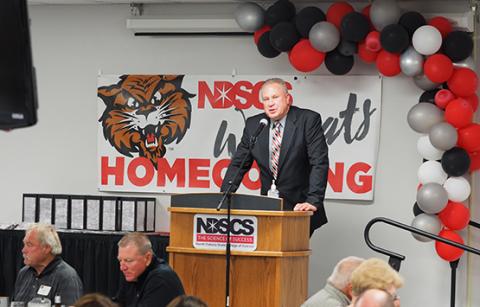 The NDSCS Athletic Department recognized the most recent inductees into the Letterwinners Hall of Fame as part of the College’s Homecoming celebration on Saturday, September 25.

Jaclyn (Sanden) Shultis helped lead the 2005-2006 Volleyball team to a Conference Championship, with a 23-10 record, resulting in her being named the Mon-Dak Conference MVP and was a two-time All-Academic Team Athlete. The 2005-2006 Wildcat basketball team had a 21-10 record, and Jackie was a NJCAA All American Honorable Mention and a second team All-Conference Player. Currently, Jackie serves as the Dean of Students at Horace Mann Roosevelt Elementary School in Fargo, N.D., and is working toward her North Dakota principal’s credential.

Mark Kruse was Team Captain, First Team All-Conference, First Team All-Region, and National Tournament All-Tournament Team in 2005. He led the 2004-2005 team in scoring and was the overall leading scorer at the NJCAA Men’s Basketball Tournament, averaging 18.8 points per game. He was also a two-time Mon-Dak Conference All-Academic selection. In 2005, after earning his associate degree in Business Administration, Mark continued his basketball career at Illinois State where he lettered. He later transferred to the University of North Dakota, continuing his basketball career and earned his bachelor’s degree in Business. Mark currently resides in Stansbury Park, Utah, where he works as the General Sales Manager at Tooele Motor Company.

Marlyn Fredericksen began teaching math classes at NDSSS in 1968 while coaching football as an assistant under Al Grage. From 1968 to 1972 the NDSSS football teams successfully finished at the top of the NDCAC every year. During that time, the NDCAC was comprised of six schools, five of which were four-year schools, with NDSSS being the only two-year college. In 1970, Marlyn also started coaching Basketball under Head Coach Don Engen. Marlyn continued coaching both football and basketball until 1976, when he was promoted as the Director of Placement at NDSCS, a position he retired from in 2002.