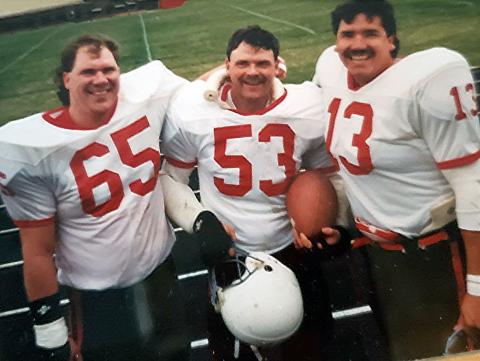 Harry Jackmann, a 1981 NDSCS Alum was recently Inducted into the Manitoba Football Hall of Fame.  Harry commented, “It is only fitting that I share a personal award with a school and community that were an integral part of my personal growth and who I am as a person today. I will always recognize Science, Wildcat football, Coaches Al Grage and Larry McDaniel, as the cornerstone of all successes I realized as an athlete.”

In the spring of 1979, The Winnipeg Blue Bomber Football team ran an all-star camp for 17- to 19-year-old athletes. Al Grage of NDSSS happened to be in attendance.  Shortly after the camp, Harry’s high school football coach, Phil Shaman accompanied Harry to visit the campus in Wahpeton.

Harry shared he didn’t aspire to continue his education. No interest had been shown by his hometown University of Manitoba Bison, and like his six siblings before him, he was going to seek employment and play junior football with the Winnipeg Hawkeyes. “Boy were the eyes of this 17-year-old city kid ever opened; that trip down I-29 forever changed my life,” commented Harry of his visit to NDSSS.  Coach Grage offered financial assistance over two years and the journey was about to begin.

Harry had one last hurdle of convincing his parents that this was a good opportunity.  They had immigrated to Canada after World War II, raised nine children, six of which had graduated from high school and went to work.  “My parents didn’t understand why I needed more schooling,” Harry shared. Phil Shaman, the high school coach, convinced Harry’s mom, and she reluctantly signed the letter of intent. Following NDSSS, Harry went on to play at MSU, Moorhead. His parents did attend his senior day at both NDSSS and MSU, the only two games they ever attended.

In reflection, small time campus life was daunting for a 17-year-old young man who had never crossed the border or left home. The acceptance by the community, his teammates and most importantly, the older members of Burch Hall, allowed him to grow. They were to become his family away from home.  Harry is thankful for the lifelong friends, like Ed Boos and the late Dennis Eastman. Harry also gives much credit to his success to coaches Al Grage and Larry McDaniel, NDSSS as a whole, and the town of Wahpeton.

Harry has spent the past thirty years working in senior housing and is currently the Director of Maintenance at River Ridge Senior Residence and is planning to retire next year. He is married to Gayleen, and together they have four sons, Zach, Riley, Nick, and Michael. They also have one granddaughter, Melody.  Harry and Gayleen enjoy fishing, antique and thrift shopping and scouring flea markets for milk glass and other treasures.

NDSCS is proud to honor and recognize Harry Jackmann for this prestigious award. Congratulations! Once a Wildcat, always a Wildcat!