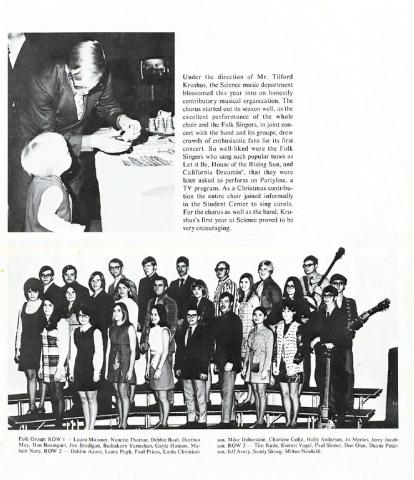 A recent study determined that technical students do better while participating in the fine arts.  This is nothing new to the campus of NDSCS which has had opportunities in music dating back over a century. The College, established in 1903, expanded to include the arts and science division in its third year of existence. By 1908, Professor Chas. C. Kirk had organized the first band on campus.

Various versions of instrumental music graced the campus depending on enrollment and instrumentation.  If there was a violin player on campus, the name would be changed to “orchestra” for the semester.  In 1921 the college boasted, “the best gymnasium around with room for athletic teams and the music department.”

During the Great Depression era of the 1930's, several vocal groups started to appear.  Men’s, women’s and mixed chorus were many times referred to as either “chorus,” “choir,” or “glee club”. It wasn't until the 1950's when both instrumental and vocal music really came together and began to tour consistently.  Small ensembles did radio commercials and in 1959-61, the “Melodic Caravan” toured weekly in a school-owned charter bus.

In 1970, a new performance group emerged on campus which would come to be known as “The Wildcat Singers.”  Newly hired Director Tilford Kroshus wanted his groups to tour the small school districts across the state.  Although the choir went through a few name changes early on, the tradition of the Wildcat Singers had begun.

This homecoming we will celebrate the 50th anniversary of this group, honoring its past directors and students.  Saturday, September 25, will include opportunities to have morning coffee with the directors, attend a banquet in which the history of NDSCS music will be celebrated, and attend the Wildcat Singers Reunion Concert.

To register, visit our Homecoming page.