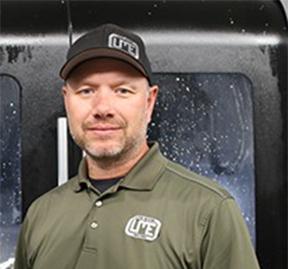 So many times, we hear of greatness and success that was started by walking the very same campus as you.  Well that’s what happened for Pecos Loughlin, a 20-year-old from a small town in Texas, nearly 25 years ago.

Pecos is co-founder of Late Model Engines, or LME, in Houston Texas. A company that was founded on the philosophy of “work smarter, not harder”.  LME is a well-known and respected high-performance engine manufacturer, especially in the racing world.

Pecos attended NDSCS from 1995 to 1997. He remembers his times of frigid winters and the flood of 1997 like it was yesterday.

Pecos was born and raised in Texas.  After graduating from high school, he wanted to do something different and was determined to get out of his home town of Weatherford, Texas. “I was always into mechanical things my whole childhood. I thought about going to the Navy, but decided to try this school thing first.” He researched NDSCS on dialup internet and came up for a tour.  Pecos stated, “it was pretty cool”, he enjoyed the facilities and being hands on.  In the fall of 1996, he packed his things and headed up north. Pecos didn’t know a soul.  He took Automotive Technology classes learning about everything he possibly could.  The automotive program was, in his words, "awesome" and the things he learned, he still uses to this day.  He even finds himself referring to his old textbooks that he keeps “close in storage” from time to time.

Pecos really enjoyed working on engines and seemed to plateau in that area. Once again Pecos loaded up his things. His passion for working on engines led him to Houston, Texas.  He continued his education here he learned everything he needed to work on engines.

In 2003 they bought their first CNC machine on eBay , “The shipping cost more than the machine did,” stated Pecos.  They soon began their business in a 1,200 square foot garage.  Their first business endeavors included selling engine heads on eBay.

Seventeen years later, Pecos and his partner are now in a 17,000 square foot building. They never dreamt they would fill the space, but with hard work and perseverance they have maxed out their room.

What set LME apart and helped them grow?   Their CNC capabilities.   Their competitors were building engines and engine parts through old fashioned machinery. Pecos began to focus on learning Auto CAD and all there was to know about CNC machining.   What used to take 8 hours now takes an hour, cutting the time down considerably.  What would take a week for heads, now takes 4 hours.  LME does about 400-500 engines and 600-700 heads a year.  Without CNC machines this would not be possible.

Pecos is thankful for his time at NDSCS and realizes his start here has led him down a successful road.  When asked about advice he would give to students approaching this type of career path?  “Become familiar with CNC machining, this is the future and it’s only going to be more and more.” Just about everything he does is computerized and trending towards CNC machining.